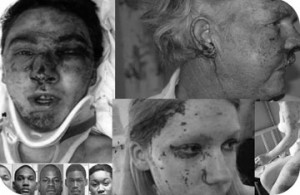 A 2003 invention of Harper’s magazine senior editor Bill Wasik that has now taken an ugly turn. Largely covered up by the media, (is that a surprise?) this new form of social revolutionary violence is no doubt causing unabashed joy in the leftist community and in Obama’s heart. Twenty to thirty black thugs meet at a designated location, announced through a Facebook or other SNS connection,  enter a shop en masse, and loot it.  This act of anarchy is often accompanied by violence directed exclusively against whites. These thugs are the Marxist dobermans – whether they know it or not. And it probably will get much worse. The revolutionary intelligentsia and others who support the president will stop at nothing to get Obama re-elected. He’ll then have another 4 years to allow increasingly violent attacks against whites, and the looting of businesses to continue. The National Guard will eventually be called in to “restore order”. At that point, the US will be a de facto police state, regardless of the degree that the military is ‘Marxized’ and expunged of its ‘patriots’ or others not yet inculcated into the ‘new order’. The USA has become a “predator nation”.  The retail economy, as a result, will take yet another a big hit. And it’s not just ‘flash violence’. Innumerable incidences of black on white violence have been reported all across the country, usually at venues like state fairs, amusement parks and sports stadiums. I know the argument: “Yeah, but it’s the white nut case with an automatic weapon who slaughters 20 or 30 innocent people at a public venue, that’s a larger issue”. This also is social anarchy, but the difference is that these psychotic and reprehensible acts are carried out by individuals, not by hordes that can only be described as ‘street armies’ armed only with hate and revenge. The former is unpredictable individual psychosis. The latter, in its varied forms,  is organized anarchy with an infinitely greater potential for social destabilization. It is ubiquitous and ongoing. to those that clamor for gun control after a mass slaying at the hands of an individual  nut-case, I ask: should we also outlaw Facebook and all other SNS’s? Knives? Stones? Auto’s?