Pictured below are frustrated losers of Antifa who wear the mask of ‘social justice’ that covers their mission of hate. They are actually street terrorists and punk psychopaths, but are referred to by the media euphemistically as ‘activists’ and ‘justice warriors’. They have an insatiable appetite for destruction because they don’t know how to create anything except trouble. They are the perfect “soldiers” for professional Communists and Marxists who wish to destroy what’s left of (mostly) the middle-class and all decency and order. They are likely an incarnation of prior residents from hell, rejoicing here on earth in their duty to Satan. The name Antifa is an oxymoron, in accordance with the technique by communists of inverting the meaning of words and phrases. It’s known as doublespeak and was described in Orwell’s classic, 1984. The left-leaning media for decades has propagated the idea that fascism is strictly right-wing Hitlerian-style extremism. They have obfuscated the truth. The meaning of the term, according to Merriam Webster is: …a political philosophy, movement, or regime (such as that of the Fascisti) that exalts nation and often race above the individual and that stands for a centralized autocratic government headed by a dictatorial leader, severe economic and social regimentation, and forcible suppression of opposition. A tendency toward or actual exercise of strong autocratic or dictatorial control…So they are only half right, at best. Maybe. Today’s left-wing fascists are very much seeking a “dictatorial leader and severe economic and social regimentation”, and especially ” forcible suppression of opposition”. But they are also using race as a tool to achieve their ends. They have designated straight non-progressive whites in general, and the white male of that demographic, in particular, and the goy-white male of that group even more particularly, as the “oppressor” who needs to be eliminated, squashed like a grape under the jackboot of their tyranny, or at least sent to re-education camps. So in reality, Fascism is very much alive and thriving in the USA. And don’t ever let the media fool you into thinking that it always wears a funny-looking mustache, has a swastika on its lapel and is thrusting a palms-out hand in salute of the fatherland. 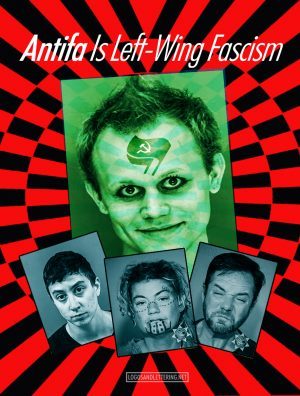