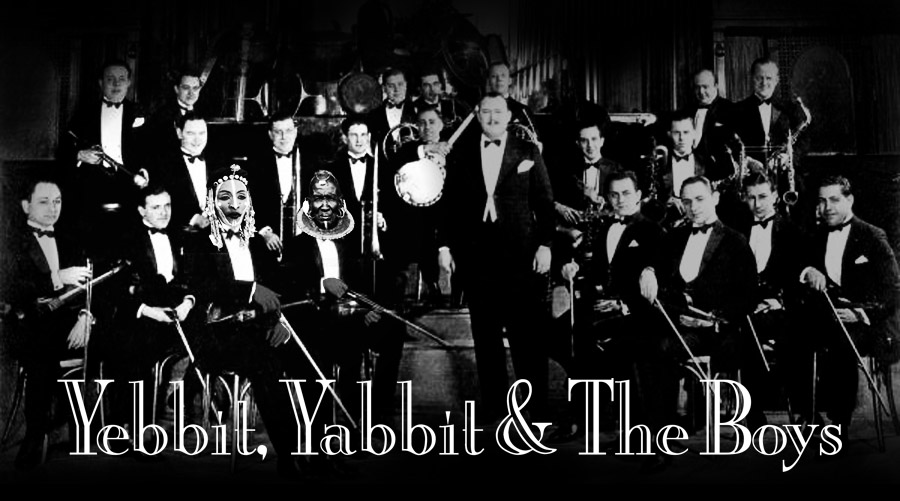 Yebbit and Yabbit (without their ‘Boys’) left of center, front row, with the Paul Whiteman Orchestra before singing & playing Tin Pan Alley favourites and Madagasgarian compositions at the Roxy Theater opening in New York City, March 11, 1927. Over five thousand were in attendance. (AP Wirephoto)

The musical duo sensation, mostly forgotten today,  were spotted in Madagascar by the enterprising adventurer and traveler Carl Denim in 1919. A music fan all his life, Denim immediately saw the commercial possibilities in the exciting rhythms of native music of the island nation. Brought to New York the following year, Yibbit & Yabbit and five of their fellow native musicians signed a contract with Owney Madden five years later. Madden was a notorious bootlegger  and owner of Harlem’s famed Cotton Club.  Yebbit & Yabbit first performed at the storied  nightclub in June, 1925 and were an immediate hit.  At times they drew larger (white only) crowds than the big name regulars of the club’s heyday like Louis Armstrong, Count Basie and Fats Waller.

Yibbiit, Yabbit & the Boys had an unusual effect on fellow musicians of all races and genres, club owners, those on the wrong side of the law  and especially the public. The island group  miraculously broke the color line in an era notorious for its racial separatism. In 1926 they accomplished the unimaginable-they were invited to play along with the legendary band leader Paul White Man, I mean Whiteman. Their association with Whiteman –  the white man’s  “King of Jazz” – proved to be cathartic as the dance band leader then cleverly  incorporated  subtle rhythms of the Madagasgarian beat, especially in the wind and percussion sections, into his compositions.

Yabbit, (1893-1929) it is interesting to note, was one of the very few people invited to be a passenger  aboard the Spirit of St Louis by Charles Lindbergh only a month  before his epic flight across the Atlantic.  Yabbit was so overjoyed by the experience that he invited the famed flyer to the Cotton Club. According to witnesses, the famously shy teetotaller Lindbergh “had the time of his life”

Tragedy struck in June, 1929, when Yabbit, 36, died suddenly of Bright’s Disease.
With the act finished,  Yebbit  (1891-1965) then sailed with the rest of the ensemble back to Madagasgar the following March. Returning to the US in September 1932, Yebbit embarked on a movie career and appeared as a butler, chauffeur or dancer in many B films of the era.  He also appeared  as a character called Schaeffer the Chauffer in a few Amos & Andy TV shows. He died in Los Angeles in 1965, of a heart attack.

There is often confusion about the original Yibbit & Yabbit act.  A comedy and ventriloquist act called Yibbett , Yabbett & the Boy, originally from Philadelphia, were regular guest entertainers on shows like The Dean Martin Show, Ed Sullivan, The Flip Wilson Show and other shows during the 60’s and 70’s. They were not related to the original group.